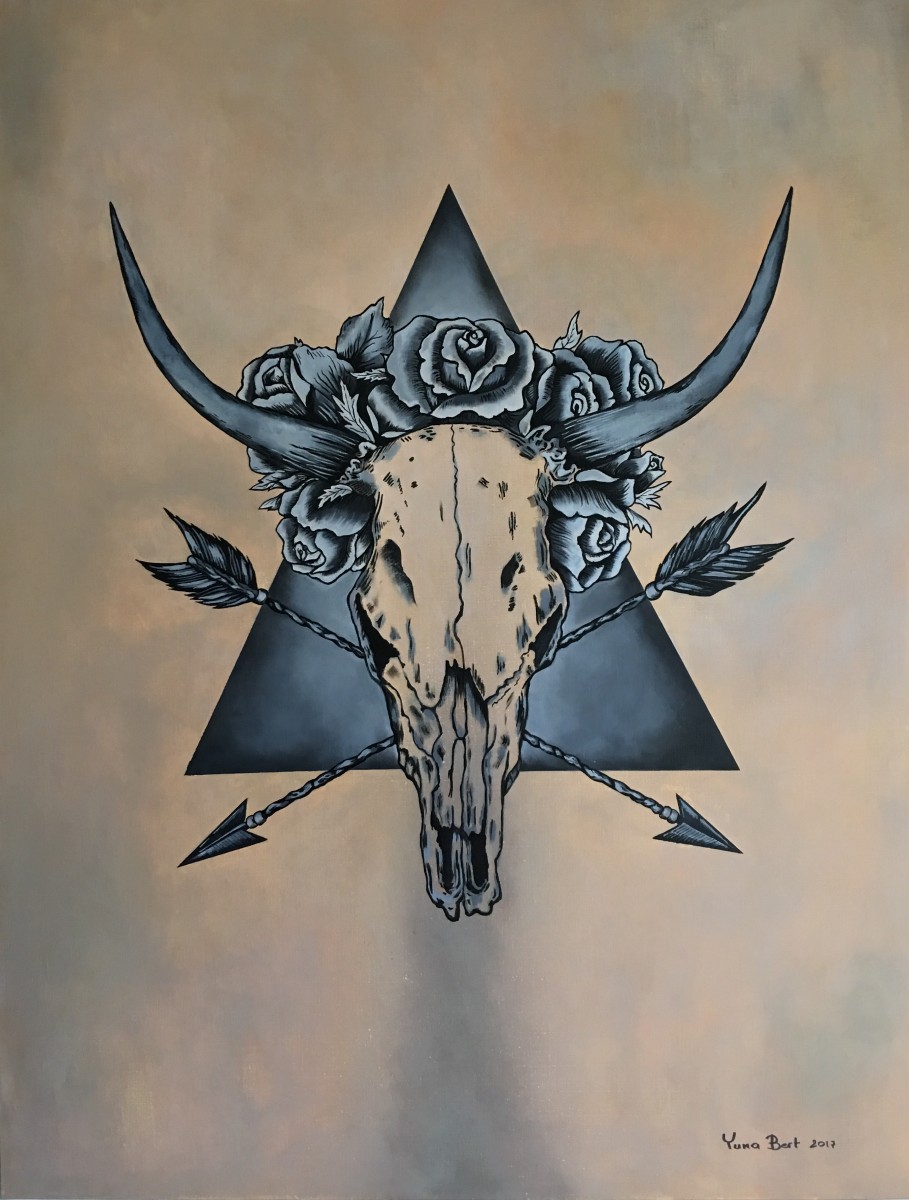 Although a skull is the epitome of Death and Destruction, a bull’s skull – much like a buffalo skull – symbolizes Life and Prosperity in Native American folklore. In fact, the two are often interchangeable. Contrastingly, seeing a bull’s skull during the days of the Wild West meant that death was near, since these bones were usually found in parched, untamed lands.
There are a variety of different beliefs when it comes to the bull skull or steer skull. Some Native American tribes believed that the bull skull is a symbol of life-long protection from all natural elements. The bull skull symbolizes attributes of the bull, such as courage, toughness, and agility.

The rose has a polar symbolism: it is heavenly perfection and earthly passion, time and eternity, life and death, fertility and virginity. It is also a symbol of the heart, the center of the universe, the cosmic wheel, the divine, romantic and sensual love.
Rose is the completion, the mystery of life, its center, the unknown, beauty, grace, happiness, but also voluptuousness, passion.

The pyramid is a symbol of the hierarchy that exists in the universe. In any area, the symbol of the pyramid can help to move from the lower plane of multiplicity and fragmentation to the higher plane of unity.
It is believed that the initiates chose the shape of the pyramid for their sanctuaries because they wanted the lines converging toward the top, rushing toward the Sun, to teach mankind a lesson of unity.

Arrow tattoos are a hugely popular tattoo design because of the symbolism of arrows. The meaning behind the tattoo is that an arrow can only be shot by pulling it backwards. Arrow tattoos are supposed to be a reminder that difficulties in life will actually propel you forwards, and on to better things. An arrow tattoo can also symbolize moving towards your goals, and not going backwards. It has the idea of heading in a direction with purpose, and as a weapon it can also symbolize power. It’s a brilliant positive symbol, which is why it’s so popular as a tattoo.
Two crossed arrows can also represent friendship in Native American culture. A popular twist on this is two friends each getting an arrow tattoo on a finger, so that when they are together they can make the crossed arrow symbol.

The first number of a regular hexagon (six faces and one center).
Three and four form seven together, another sacred number. Containing a triple as a symbol of Heaven and soul and four as a symbol of the Earth and the body, the seven is the first number embracing both the spiritual and the temporal. The number of sacraments pertaining to the spiritual side of things is a mysterious divine power in nature.
Seven is the mystical nature of man: 7 = 3 (mind, soul, spirit) + 4 (world). The seven doors of man: two eyes, two ears, two nostrils and a mouth.
In addition, seven – the number of the universe, the macrocosm, means completeness and totality.
And not only on earth, but also in heaven there is this seven: in the seven stars of the Great Bear (sometimes they are considered « inviolate », since they are visible all year round in the northern hemisphere), in seven stars of each truly constellated constellation. For truly the number seven, depicting the three fundamental principles of the world, reflected in the fourfold law of dynamics, is the number governing the life of the Cosmos. The three higher principles dominate the four lower and possess their elements.
The number seven is perfection, confidence, security, peace, abundance, restoration of the integrity of the world, synthesis, as well as virginity and the number of the Great Mother. The seven cosmic eras, the Seven Heavens, the regions of hell, the main planets and the corresponding metals, the world spheres, the rays of the Sun (the seventh ray of the Sun is the path by which a person passes from this world to the next). Seven human ages, pillars of wisdom, rainbow colors, days of the week, notes, octaves, wonders of the world, seven deadly sins, seven categories of absolute appreciation.