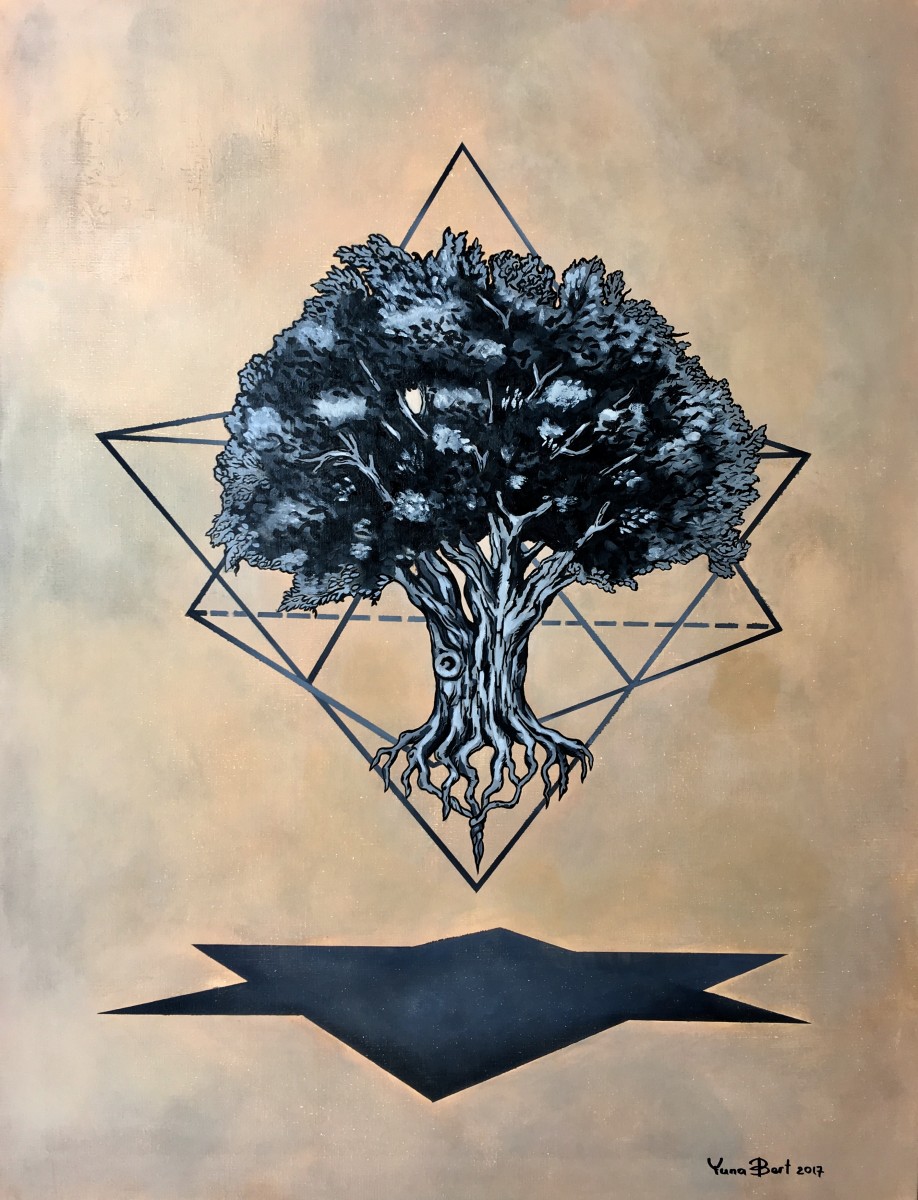 Oak – a symbol of power, endurance, longevity and nobility, and also glory. In ancient Rome, a wreath of oak leaves was the highest award to the victorious leader.
As an emblem of valor and courage oak (oak leaf, oak branch, oak wreath, oak garland) use in military signs the differences in many countries.

A star tetrahedron is a figure consisting of two interconnected tetrahedra. This figure can also be perceived as a three-dimensional star of David.
Tetrahedra appear as two opposite laws: the law of the spirit (radiation, bestowal, selflessness, unselfishness) and the law of matter (drawing in, cooling, congealing, paralysis). Only man can consciously combine these two laws, since he is the link between the world of spirit and the world of matter.
Thus, the star tetrahedron represents the two poles of creation in complete equilibrium.

Platonic Solids are a set of five, three dimensional, shapes that date back to the Greek mathematician Pythagoras and later named after the Greek Philosopher Plato. The Tetrahedron, Cube, Octahedron, Dodecahedron and Icosahedron each have unique characteristics, in that the sides, edges and angles are all congruent. In other words, all sides are equal, the angles are the same and the faces are identical.
It was the great Greek Philosopher, Plato, who paired each of the platonic solids with a classical element (fire, earth, water, air, and ethers/Universe). He believed that these three dimensional shapes were the building blocks to the creation of everything—in us, around us and beyond. If you view a 3-D model of any of the elements contained in the periodic tables, you will see that each has a crystalline structure at the Atomic level made up of these Platonic Solids shapes.

Another profound spiritual lesson from tree symbolism comes from the roots. They serve as anchors, gripping tightly into the Mother (Earth). They form a symbiotic union with the earth, drawing from her various nutrients and water. Tree roots can span for miraculous lengths – like branches – ever reaching out for more. This is metaphoric of our own inner root systems of beliefs and spirituality. We must dig deep, and be firmly rooted in a structured system of beneficent beliefs. It’s the only way we are insured upward mobility.
A vital observation about roots is they are unseen. They remain (mostly) underground. In much the same way, our spiritual progress will be hidden from view to the common eye. Our growth and power occurs beneath superficial layers. Moreover, our belief systems are much like root systems of a tree – they are sacred, tacit and they anchor us in our lives.