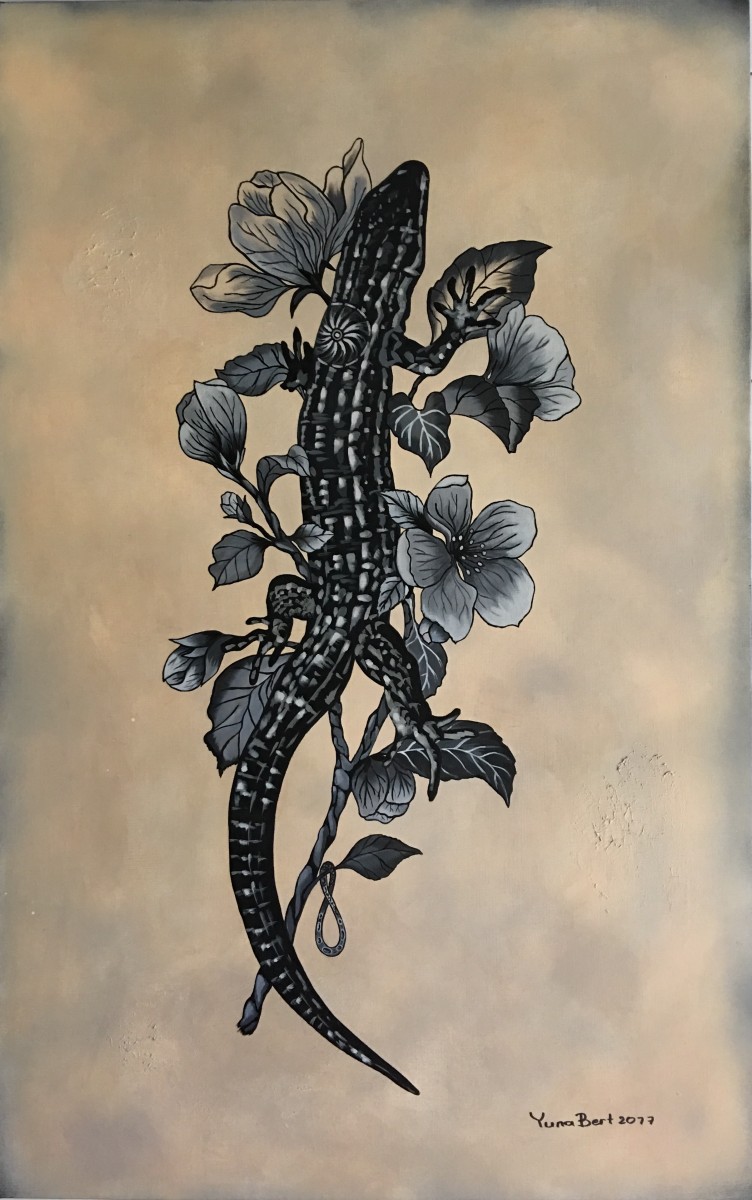 This brisk, fast-moving animal is a symbol of agility, elusiveness, and rebirth (the latter) due to the lizard’s ability to leave its tail caught, which then grows back. Lizards, because they hide in the shade during the heat of the day, are considered the keepers of the shadows, as well as the keepers of sleep and dreams. The lizard, in addition, can symbolize the subconscious and shadow of our inner world.
The lizard was considered a good sign in Egypt and in the ancient world, where it was sometimes associated with wisdom. It became an attribute of allegorical images of Logic. The symbol of Mercury, the messenger of the gods.

Apple blossom flowers are a symbol of the heart’s pleasures and delights. The magic of this flower is its ability to transform your mood and lift your spirits, to raise your vibrations. Apple blossom is aligned to the heart chakra. The apple tree is a symbol of fertility, one of the symbols of Mother Earth. Blossoming apple-tree – eternal youth, and in China – peace and beauty.

The sun is one of the twelve symbols of power, the main symbol of the created energy.
As a source of heat, the Sun represents vitality, passion, courage and eternal youth. As a light source, it symbolizes knowledge, intellect. In most traditions, the Sun is a symbol of the masculine. The sun also is life, vitality, the embodied character of the personality, the heart and its aspirations.

The number 8 in the Bible represents a new beginning, meaning a new order or creation, and man’s true ‘born again’ event when he is resurrected from the dead into eternal life.
Number of the perfection, infinity. In mathematics the symbol of the infinity is represented by a 8 laid down. Symbol of cosmic Christ. Number figuring the immutable eternity or the self-destruction. It represents also the final point of the manifestation.

In China, the 8 expresses the totality of the universe. Number of the balance and of the cosmic order, according to the Egyptians. Number expressing the matter, it is also the symbol of the incarnation in the matter which becomes itself creative and autonomous, governing its own laws.

According to Pythagoras, eight is a symbol of harmony, a sacred number. The number of divine justice. It borrows the form from two woven snakes on a caduceus. The octagon is the beginning of the transformation of the square into a circle and vice versa.
Being the first cube of the deuce, this number symbolizes three-dimensionality, as well as the perfection of the six facets of the cube.
As a symmetrical figure representing a rotated sign of infinity (symbolic expression of the number of infinity on the Tree of Life – figure eight), there is a duality and means simultaneously two worlds – material and spiritual. The number is made up of two numbers: 4 and 4, that is, it is a double square, and therefore represents stability, perfected, which can be understood as a fourfold equilibrium. The symbol of unchanging (predestined) Destiny. In astrology refers to the planet Saturn, which is called the planet of Destiny.

Spiritually, the eight is the goal of the initiate who has gone seven steps or Heaven, and therefore this number is the symbol of the new-found paradise, as well as renewal, restoration, happiness, perfect rhythm. The eighth day gave birth to a new, perfect man. After seven days of fasting and repentance on the eighth, spiritual renewal begins. The number of octaves (7 + 1) and everything that starts again. Eight winds and directions together with intermediate directions. The Eight symbolizes also pairs of opposites.
Other symbolic meanings: love, advice, location, law, agreement.
One loop of number eight symbolizes revolution, coups, anarchy, self-will and eccentricity. The other is philosophical thoughts, a strong inclination to occult teachings, religiosity, concentration of intentions, zeal for action and a fatal view of the world.